If you’ve ever considered enrolling your kids in music lessons, now’s the time to take action. It’s never too early to get your kids hooked on music, and a strong musical background can help your children excel in other areas, too.

Here’s what science has to say about it.

If you want your kids to excel at math and reading, you might consider enrolling them in music lessons. According to research performed by developmental psychologist Nadine Gaab, music helps pave the way for the development of executive function skills. These include skills like goal-setting, problem-solving, and flexible thinking, which correlate strongly with academic abilities.

In the study, researchers performed two experiments, one with 30 adults and one with 27 children. Each group featured both musically trained and untrained participants. What researchers found was that adults with musical training performed better at tests of verbal fluency, cognitive flexibility, and working memory. In the children’s group, the children with musical training showed enhanced processing speed and verbal fluency.

It’s believed that musical training helps promote the development and maintenance of executive function skills, which can lead to higher academic performance. Though it’s not clear where the connection lies—whether music increases executive function or if people with these skills stick with music longer—it’s clear that the two are linked. It never hurts to sign your child up for music lessons and see where it takes them.

According to a 2010 study, researchers consider music training to be the same kind of exercise for the auditory system that physical exercise is for the body. Improving auditory function can lead to other cognitive enhancements, such as better language development in young children.

As your kids practice music and develop an ear for the notes and rhythms, they’re doing much more than memorizing musical tunes. They’re also developing their speech skills. In a study published in the Journal of Neuroscience, researchers found that the neural mechanism related to reading and language abilities was stronger in children who had studied music for 2 years.

The interesting thing about this study was that it took place in a community music environment rather than in private music lessons. This goes to show that parents don’t need to enroll their children in expensive music programs to help them see the benefits of musical training.

That said, the study did show that there were few changes in a child’s nervous system function in just one year of musical training. If you want your kids to develop an ear for music and language, it’s best to stick with music beyond a year, and longer if you can.

Strongly related to the ability to hear sounds is the ability to read. Researchers say that children who have trouble processing language also struggle with reading. As NPR points out, “reading begins not with our eyes but with our ears, as we hear and catalog speech sounds.” Since music can help develop these listening skills early on, it can later translate into enhanced reading ability.

A 2013 study took a look at this very topic. Researchers suggest that learning music is not only beneficial as part of a general developmental education, but could also help children with language-learning difficulties.

According to one study published in 2010, “cognitive functions, such as attention and memory, drive perception by tuning sensory mechanisms to relevant acoustic features.”

The case for memory and language skills is further supported by a 2013 study performed by researchers at the University of Geneva in Switzerland. Researchers say that children who take musical lessons experience better verbal memory, reading ability, and executive functions. They even excel at second language pronunciation accuracy. What’s more, the ability to learn an instrument may help predict future academic performance and IQ.

In the study at the University of Geneva, researchers showed that musical training can result in brain plasticity and functional changes. That means the brain makes functional connections that can help in other tasks. For example, researchers point out that long-term music training can cause musicians’ multi-sensory and motor networks to work better together.

Researchers also point out that musical training is more strongly connected to behavior centers of the brain, such as emotional arousal and rewards, than passive exposure to auditory stimuli. One thing to note from this research is that “the degree of observed structural and functional adaptation in the brain correlates with intensity and duration of practice.” That means real commitment to music is a must.

Another finding that came from the University of Geneva was that music can impact students’ empathy and social skills. They point out that music conveys meaning and impacts both a player’s and listener’s emotions. This emotional impact is believed to have a positive effect on musicians’ social development. By better understanding language sounds, musical training can teach individuals to recognize and perceive emotions in human voices.

Musical training comes with many benefits that can be tied to subjects outside the arts. Don’t wait to enroll your kids in musical programs. The sooner you do, the sooner you’ll see their auditory, language, and reading skills improve.

Get creative and free teacher articles - delivered to your inbox weekly. 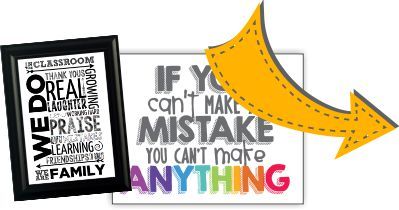 p.s. A bonus pack of 11 printable classroom posters are headed your way!

You're in! Check your email for your FREE instant printable and be on the lookout for my weekly emails. Keep reading this blog for more creative and free teaching K-5 ideas right now.

Jennifer Paterson, A.R.C.T., Master’s of Music (voice, piano), has degrees from Boston University, The Royal Conservatory of Music of Toronto and the University of British Columbia. She was a recipient of The Canada Council Award to study at the well-known Royal Opera House in London, and was the principal soprano for the Boston Lyric Opera Company. Her dedication to the legitimate training of the voice and piano has made her a definite asset to the musical community of Southern California.

« Thank You Gift for Email Subscribers
How to Teach Addition and Subtraction with a Vertical Strategy (+ Free Worksheets) »
Welcome We find and feature creative, free teaching ideas and activities for K - 5th grade. You get back a little more time to yourself. New? Start Here